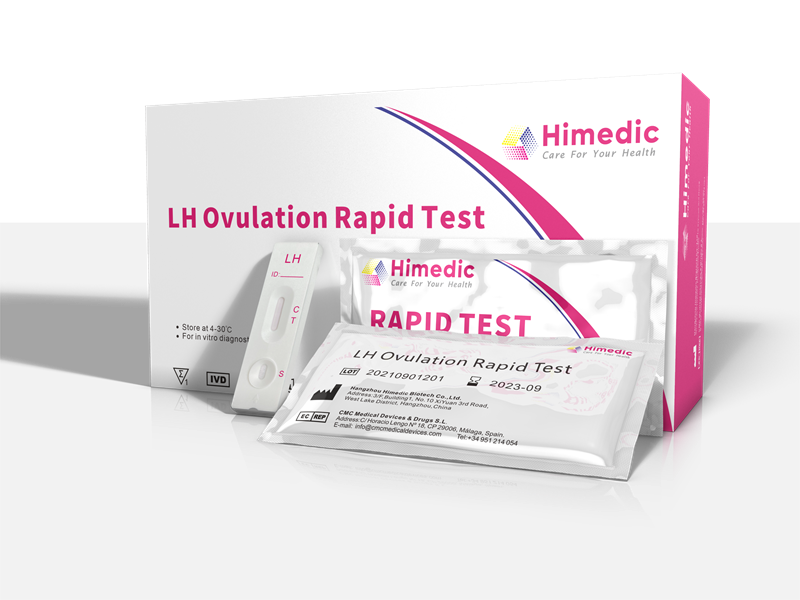 The LH One Step Ovulation Test Device (Urine) is a rapid chromatographic immunoassay for the qualitative detection of luteinizing hormone (LH) in urine to aid in the detection of ovulation.


Send email to us

Ovulation is the release of an egg from the ovary. The egg then passes into the fallopian tube where it is ready to be fertilized. In order for pregnancy to occur, the egg must be fertilized by sperm within 24 hours after its release. Immediately prior to ovulation, the body produces a large amount of luteinizing hormone (LH) which triggers the release of a ripened egg from the ovary. This “LH surge” usually takes place in the middle of the menstrual cycle.1
The LH One Step Ovulation Test Device (Urine) is a complete system to help predict the time of ovulation, and peak fertility. It is during this fertile time that pregnancy is most likely to occur.
The LH One Step Ovulation Test Device (Urine) detects the LH surge in urine, signaling that ovulation is likely to occur in the next 24-36 hours. The test utilizes a combination of antibodies including a monoclonal LH antibody to selectively detect elevated levels of LH.
Important: The LH surge and ovulation may not occur in all cycles.

The test contains anti-LH particles and anti-LH antibody coated on the membrane.

★ For professional in vitro diagnostic use only. Do not use after the expiration date.
★ Do not eat, drink or smoke in the area where the specimens or kits are handled.
★ Do not use test if pouch is damaged.
★ Handle all specimens as if they contain infectious agents. Observe established precautions against microbiological hazards throughout the procedure and follow the standard procedures for proper disposal of specimens.
★ The used test should be discarded according to local regulations.
★ Humidity and temperature can adversely affect results.

✽ Determine the optimal time for urine collection. For best results, collect urine at about the same time each day. Some women have found that their best specimen is after 12 noon. Do not collect the first urine specimen after waking up.
✽ Reduce liquid intake approximately 2 hours prior to urine collection.
✽ Record the date, cycle day and time of urine collection. See the TEST RESULTS CHART at the end of this package insert.
✽ Urine can be stored at room temperature for up to 8 hours or at 2-8°C for up to 24hours. Do not freeze. For best results, test urine on the same day that it is collected. If refrigerated, let urine reach room temperature before testing. Do not shake the container. If a sediment forms at the bottom of the collection container, allow the sediment to settle. Use only urine from the top of the container.

Materials Required But Not Provided

When to Start Testing

Finally, determine the day to start testing. Starting from and including the first day of the last period, count ahead the number of days indicated in the previous step. This is the day on which testing should begin. As a basic guideline, it is recommended to test once a day for five days.
Note: If uncertain about the length of the subject’s menstrual cycle, use the shortest menstrual cycle length (21 days) when reading the chart. In this case, it may be necessary to test for more than 5 days.
Example: The subject’s usual menstrual cycle length is 28 days. The chart indicates to count ahead 11days from the subject’s last period. The subject’s last period started on the 3rd. Starting from and including the 3rd, count ahead 11 days to arrive at the 13th. Urine collection and testing should start on the 13th and proceed through the 17th. (See the Example Specimen Calendar below).

Allow the test, urine specimen and/or controls to reach room temperature (15-30°C) prior to testing.
1.Determine the day to begin testing. (See the above section: “WHEN TO START TESTING”).
2.Bring the pouch to room temperature before opening it. Remove the test device from the sealed pouch and use it as soon as possible.
3.Place the test device on a clean and level surface. Hold the dropper vertically and transfer 3 full drops of urine (approximately 100 L) to the specimen well (S) of the test device, and then start the timer. Avoid trapping air bubbles in the specimen well (S). See illustration below.
Wait for the colored line(s) to appear. Read results at 5 minutes. Do not interpret the result after 10 minutes.

A procedural control is included in the test. A colored line appearing in the control line region (C) is an internal procedural control. It confirms sufficient specimen volume, adequate membrane wicking and correct procedural technique.
A positive result indicates that the urine specimen contains the level of LH that would indicate the beginning of ovulation. Ovulation should begin in 24-36 hours.
A negative result indicates that no LH surge has been detected and daily testing should continue.
Not every woman ovulates mid-cycle, therefore, a positive result may not appear during the selected days of testing. If you see no positive result, continue testing with the LH One Step Ovulation Test Device (Urine) for several more days. If negative results persist, test again during the next menstrual cycle.

1.For professional in vitro diagnostic use.
2.This test may not be used as a form of birth control.
3.The test results should not be affected by pain relievers, antibiotics and other common drugs. Medication containing hCG or LH may affect the test and should not be taken while using the LH One Step Ovulation Test Device (Urine). In addition, the test will not work properly for subjects who are pregnant, in menopause, or are taking birth control pills.
4.Keep out of the reach of children.

Laboratory studies show that the sensitivity of the LH One Step Ovulation Test Device (Urine) is 40mIU/mL and the accuracy is 99.1%.

The LH One Step Ovulation Test Device (Urine) has been tested with commonly known drugs and hormones including FSH (1,000 mIU/mL), TSH (1,000 IU/mL), and hCG (10,000 mIU/mL). At the levels tested, none of these substances interfered with the expected test results.

1.Can the LH One Step Ovulation Test Device (Urine) be used to avoid pregnancy?
No, the test should not be used as a form of birth control.
2.Do alcohol or common medications affect the test?
No, but a physician should be consulted if taking any hormonal medication. Also, recent oral contraceptive use, breastfeeding or pregnancy could affect the results.
3.How long will the lines remain visible?
The test should be read at 5 minutes for best results. A positive (Surge) result will never disappear. The colored line(s) may become darker and a tinted background may appear after several hours. Some negative results may later display a faint second color line because of evaporation from the test line region, which prevents complete migration of the test chemicals. Therefore, do not read the result after 10minutes and discard the test after reading the test.
4.Once a positive result is obtained, when is the best time to have intercourse?
Ovulation is likely to occur within 24-36 hours. This is the most fertile time. Sexual intercourse within this time frame is advised.
5.Does this test replace the basal body temperature method (BBT)?
The shift in basal body temperature primarily indicates that ovulation has already occurred. The LH One Step Ovulation Test Device (Urine) indicates that ovulation is about to occur.
6.Does a positive result guarantee a pregnancy after intercourse within the fertile days?
There are many factors that can affect the ability to become pregnant. Often it may be necessary to use the test kit for 3-4 months before achieving pregnancy. A physician should be consulted if pregnancy is not achieved after 3-4 months.
7.How soon can pregnancy be confirmed?
Rapid pregnancy tests can provide results as early as the first missed period.
8.What time of the day should I perform the test? Do I need to use first morning urine?
First morning urine is not recommended, but any other time of day is suitable. For best results, try to collect urine at approximately the same time each day.
9.Will heavy intake of liquids affect the result?
Heavy intake of fluids prior to testing will dilute the hormone in urine. Limiting fluid intake for about two hours before collecting urine is suggested.

Write your message here and send it to us